Before Christmas I was unemployed and looking for some temporary work. This period used to be a good way of securing short term employment, and could often lead to a permanent position after the twelve weeks had elapsed. Checking out the notice board, down at my local Job Centre Plus, my eyes stopped on a advert from Royal Mail asking for temporary staff to get them over the Christmas deluge. 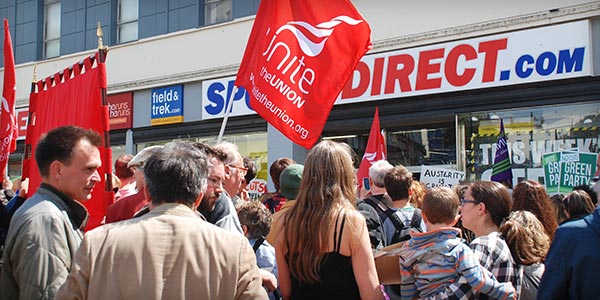 I’d never failed at securing such work in the past and felt pretty confident of landing myself a job that would help me secure some much needed seasonal cash. Once home I logged in and applied for the job on the Royal Mail website.

Usually you’re kept waiting, but they were on the ball and offered me an interview at a local hotel within the next couple of days. However, when I read through the attached pdfs it soon became clear from the terminology that this was not really a job at all, but a zero hours contract where instead of expecting regular work up until Christmas, you would be put in a ‘pool’ and wait around until they needed you for a couple of hours when there was a rush on. Call me old fashioned, but I’m not going to be exploited by anyone. Take it as read I did not attend the interview and in my conversations with postal workers, I wasn’t the only one to turn them down.

Zero or flexible hours contracts were brought in by the last Labour administration as a way of creating flexibility for those who thought such an arrangement would help balance their work and home life. But over the past seven years this system as been exploited to the point that almost one million british workers are now on these contracts.

A survey carried out at the end of 2015 by the Office of National Statistics shows there are around 68,000 workers in the Yorkshire and Humber region on zero hours with no guarantee of regular hours. The figures revealed that in the period from October to December 2015, this equated to 2.7 percent, or one in 37 people in employment across the region.

This has created a very insecure job market, something that businesses are increasingly using to their advantage in forcing women and young people to sign up to these contracts that do not guarantee regular working hours.

While people in mainstream work can expect regular working hours, a pension scheme, holiday pay, sick pay and other benefits, those of zero hours are left wondering if they have any work the next day and none of the above entitlements.

For some, zero hours do have a part to play in the modern, flexible labour market. For instance students and parents with very young children often say that this arrangement can offer them the flexibility they need to make things work in other areas of their daily lives.

Zero hours may be working for some employers and a small sector of the work force, but as people on these contracts are often left wondering when the next pay cheque will go in the bank, they are denied credit cards, car loans and mortgages, things full-time employees take for granted. Inevitably, if this trend continues, it will have a big impact on our consumer driven economy.