Following the great success of 2014 when Sir Gary Verity and his team at Welcome to Yorkshire succeeded in bringing the Tour De France Grand Départ, the media have hailed Yorkshire as “Europe’s newest cycling destination”, but Yorkshire has always had a rich cycling heritage, despite the rugged and hilly terrain, with some of the UK’s oldest cycling clubs located in the county. It’s also true to say that some of Britain’s greatest pioneers of the cycling world come from Yorkshire. Riders such as Brian Robinson, Beryl Burton, Barry Hoban, Tom Simpson, Malcolm Elliot, Ed Clancy, Ben Swift and Lizzie Armitstead.

Yorkshire has also been awarded its own three-day international cycle tour. And, despite the weather been more cold and damp than warm and sunny, the inaugural 2015 Tour de Yorkshire was a big success taking the riders through some of the spectacular scenery captured in the previous year’s Tour de France. Between them, the Tour de France and Tour de Yorkshire have generated over £150 million towards the county’s economy and created a legacy which will benefit generations in years to come. 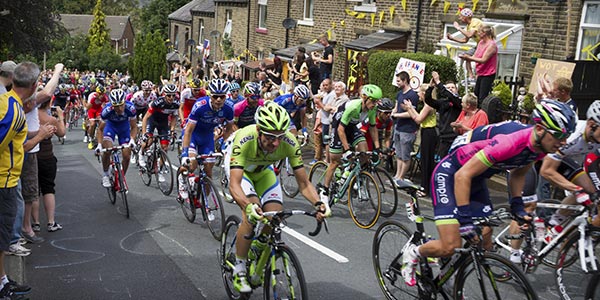 Part of this legacy involves the creation of a £4.5 million state-of-the-art closed road cycle track on The University of Leeds playing fields near Adel, North Leeds. When it opens in the autumn of 2016 it is envisaged that the 1.6 kilometre tarmac circuit will be used by students, staff and the community around Adel. There is also a boost for triathlete’s, the Brownlee brothers, with the refurbishment of the Broddington Pavilion as a base for British Triathalon’s elite training centre. Something Olympic triathlete Jonny Brownlee was excited about saying “it would take the triathlon facilities to the next level and make Leeds the complete triathlon city.”

The Tour de Yorkshire 2016 promises to be just as thrilling as last year’s, when some of the world’s best cyclists battle it out over three days to take the race leader’s blue jersey.

Day one, Friday, April 29th starts in Beverley, home to one of England’s finest Minsters before the peloton races to Tadcaster on then on to Knaresborough which was one the scene of some of the largest crowds for the Tour de France in 2014. From here the race revisits some of the climbs last visited in the Grand Départ route of 2014, taking the riders past Brimham Rocks before the finish in Settle.

On day two, Saturday, April 30th the race begins in the market town of Otley, home to the current women’s road World Champion, Lizzie Armitstead. From Otley the race heads south over roads not previously ridden in the Tour de France or last year’s Tour de Yorkshire, towards Harewood Bank, Lotherton Hall, Pontefract towards Conisborough Castle and ending in Doncaster.

Stage three, Sunday, May 1st will be more familiar to the riders who raced here last year when it starts in Captain James Cook’s hometown of Middlesborough before heading off into Herriot Country. Here the riders will face the challenge of Sutton Bank where the first of six Mountain points are up for grabs. Once over the tops, the race heads over the North Yorkshire Moors and down towards Whitby and Robin Hood’s Bay before the thrilling finish on Scarborough’s North Bay.