When I was growing up in the 1970s and 1980s Vinyl was king. Let’s face it, initially, there wasn’t much else around to compete with the black, shiny discs so far as recorded music was concerned. There were the chunky 8-Track tapes which were mainly used for in-car entertainment, but these were bulky and soon made obsolete by the introduction of the tape cassette. 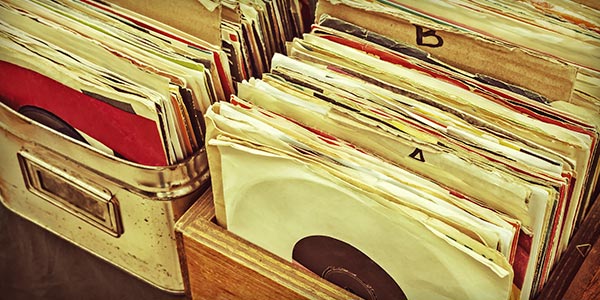 There was also a buzz when you or your friends got the latest album. The phone would ring and my friend Russell was on the other end, an urgency in his voice as he could hardly hold back on telling me he’d just got a copy of Aladdin Sane!

I always felt there was a deeper connection with your record collection. Not only were you lost in music, there was the added value of feeling that you were in possession of a ‘work of art’. Indeed, the cover designs were talked about almost as much as the LP itself. Everyone sought out posters to adorn their walls. The work of Roger Dean, who’s work gilded many a YES album cover, was highly prized to create a talking point when you had your mates round. One friend of mine even had me paint ‘cover versions’ of Led Zeppelin and Bat Out of Hell onto canvas for her bedroom wall!

Alas technological advances began to chip away at vinyl’s dominance of the music market and the introduction of the Sony Walkman in the early 1980s made music truly portable, so by 1984 sales of music cassettes leaped over LP sales. From 1985 to 1992 music cassettes dominated album sales in the UK.
As the years progressed the vinyl album almost disappeared from the scene as new formats such as the Compact Disc replaced both records and cassettes. The way we buy and access our favourite sounds as radically changed the way we listen to music to the point that digital sales and downloads now account for a large share of the market.

Vinyl sales reached an all-time-low in 2007 when only 205,292 vinyl albums were sold in Britain and millions now listen to music via mp3 or iTunes downloads. But there are still many of us who prefer to have the physical copy in our hands, that urge to own a ‘piece of art’ resolute in its refusal to lay down and die.
Like Lazarus, vinyl also refuses to let the needle slip finally into the run-out-groove and in recent years, partly thanks to the growing popularity of Records Store Day, small herds of vinyl enthusiasts have returned to browse through the re-emerging vinyl album sections of HMV and the independent record stores.

Many journalists would have us believe that vinyl is the domain of the over 35s, but that’s not the picture I’m getting. A visit to any of West Yorkshire’s quality indie record stores will soon erase that myth as music lovers in their teens and twenties can be seen flicking through the album racks. I was puzzled as to why my teenage daughter found vinyl records so alluring. I think it was the ‘how the hell did a needle make the sound come out of this?’ that compelled her to discover the beauty of the LP record. She is now custodian of my original Cure albums and singles, which are still in pretty good nick!

In 2014, vinyl sales passed the one million mark for the first time since 1996 and in the first quarter of 2015 sales were up in the UK by an impressive 56%. Back in the day, a vinyl LP would probably cost around £5 but these days I wouldn’t expect to get much change out of £30, although you can pick certain ones up for an average of £20. Thanks to events like Record Store Day a whole new generation of music fans are learning to love vinyl.